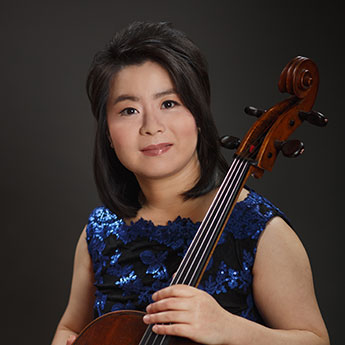 Hai-Ye Ni joined The Philadelphia Orchestra as principal cello at the beginning of the 2006/07 season after having served as associate principal cello of the New York Philharmonic since 1999.

Among the ensembles with which she has appeared as soloist are the Chicago, San Francisco, Vancouver, Shanghai, Singapore, and Finnish Radio symphonies; the Orchestre National de Paris; the Vienna Chamber Orchestra; and the Hong Kong and China philharmonics. Her recital credits include the Kennedy Center for the Performing Arts, the Smithsonian Institute, Weill Hall at Carnegie Hall, and the Wallace Collection in London.

Hai-Ye Ni is a recording artist with Delos Music, Ondine, and Naxos. Her CD, Spirit of Chimes (Delos) is a collaboration with violinist Cho-Liang Lin and pianist Helen Huang of chamber music by Zhou Long. She is featured on an Ondine recording with the Philadelphia Orchestra and Christoph Eschenbach of Shostakovich’s Symphony No. 5 and Seven Romances on Poems of Alexander Blok. Her 1998 debut solo CD on the Naxos label was named CD of the week by Classic FM London.

A respected musician, she served on the jury of Finland’s V International Paulo Cello Competition in April 2013 and has given master classes at the Curtis Institute of Music, the Mannes College of Music, the Manhattan School of Music, the Shanghai Conservatory, and the Central Conservatory in Beijing. Among her honors and awards are first prize in the 1996 International Paulo Cello Competition, second prize of the Rostropovich competition in 1997 and a 2001 Avery Fisher Career Grant

Born in Shanghai, China, Hai-Ye Ni began cello studies with her mother and later studied at the Shanghai Conservatory. She continued her musical education with Irene Sharp at the San Francisco Conservatory, Joel Krosnick at the Juilliard School, and William Pleeth in London.