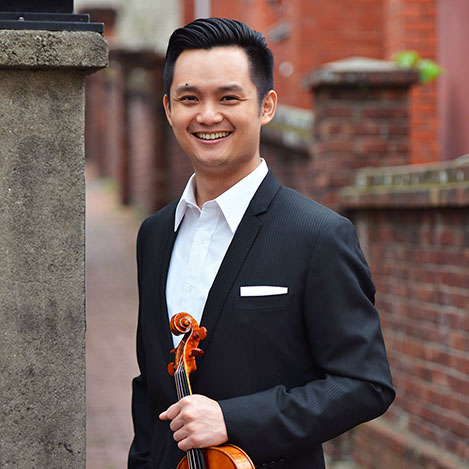 Violin
“[Shih-Kai Lin’s] interpretation was notable for a keen understanding of the emotional and structural shape of the music… His playing breathed with intensity, drama and solitude.” ─ Houston Chronicle

Shih-Kai Lin has toured internationally as a soloist, chamber musician, and orchestral member, and has presented recitals in Austria, Belgium, Canada, Indonesia, Japan, Taiwan, and the United States. He was the first prize and the audience choice award winner of the 2006 Ima Hogg Competition and awarded the Aspen Dorothy DeLay Fellowship.

Lin was born in Taiwan and started his musical studies at the age of four. He attended Walnut Hill School of the Arts in Natick, Massachusetts, where he studied with Marylou Speaker Churchill. Mr. Lin graduated from Walnut Hill School with honors and was the recipient of the Frances B. Lanier award from the New England Conservatory’s Preparatory School

He holds both the Bachelor's and Master's degrees from the Juilliard School under tutelage of Cho- Liang Lin and Naoko Tanaka. Lin holds a doctoral degree of Musical Arts from the New England Conservatory where he studied with Miriam Fried.

Shih-Kai Lin is currently the artistic director of the Tonebank International Music Academy and Festival, and he is on the violin faculty of University of Taipei and National Taiwan Normal University.